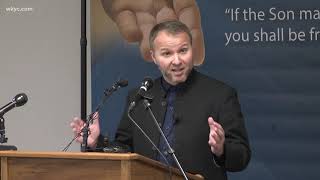 Christian Aid Ministries is giving an update at its headquarters in Ohio “to share more information” regarding the return of 17 hostages who were held in Haiti for weeks.

“Everyone, including the 10-month-old baby, the 3-year-old boy, and the 6-year-old boy, seem to be doing reasonably well,” Troyer wrote on the Christian Aid Ministries site.

But they that wait upon the Lord shall renew their strength; they shall mount up with wings as eagles; they shall run, and not be weary; and they shall walk, and not faint.
Isaiah 40:31
DailyVerses.net