10 Places in TEXAS You Should NEVER Move To 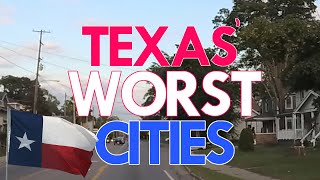 Howdy! Texas is the Lone Star state where everything is great, right? Not always.

LINK TO THE NEW CHANNEL: https://www.youtube.com/channel/UCaaUXch8Wm42KSdYh6p8ffA/

^^*Please subscribe to the new channel. We’ll be doing 90% of the new videos on that new channel, called Planet Snacks. It will be AMAZING!*^^

Just like every state in the USA, there’s good and a lotta bad. The goal today is to talk about the worst places you could live in Texas. These are the places that just about everyone here would agree are pretty crummy.

In order to determine which are the worst places in Texas, we just had to look at ‘worst’ things. That means statistics like crime, poverty and bad schools. The type of stuff most Texans tend to avoid.

So, grab some BBQ and throw on your boots as we mosey on through the worst places you can live in the state of Texas.

Killeen We begin our journey along the worst places you can live in Texas in the small city of Killeen, just off of I-35 west of Temple.

Our next stop along our worst Texas tour brings us to Cleveland Texas. This is a much smaller place – the population is only around 7,000 people. Cleveland is along I-69 northeast of Houston.

Okay, so we’re going to take a quick stop in our 8th worst place you can live in Texas, Hutchins. Here in Hutchins, things aren’t very good. This teeny little city of 5,200 people is just outside the Dallas belt line.

But for now, it’s time to move on to our 7th worst place to live in Texas, El Paso. For things to do, there is more than in the other cities we’ve mentioned so far. Of course, there’s a university here, and some mountains to hike in. And you can go to Juarez for a thrill. Does having more 99 cent stores than anywhere else on earth count for something?

Our next stop along our worst place to live in Texas tour stops in Donna. This little city of 15,000 is located Donna, located at the far southeastern tip of the state, between McAllen and Brownsville.

We’re halfway through our tour of the most worstest cities to live in the entire state of Texas and we’re going to stop in number 5, Humble. Like Houston, Humble is a case of the haves and have nots. It has a low economic outlook and significantly high number of convenience and discount stores.

Our fourth worst place to live in the state of Texas is none other than Port Arthur. Here, home prices are the 16th lowest in Texas, and the unemployment rate is in the top 10%.

Hey now. We’re in the top three worst places you can live in Texas, as we come to Robstown. A ton of people are out of work here – more than 8%. Average home price in Texas is $151k. Robstown’s is $50k.

Who’s our runner up as the worst place in Texas? Bellmead is. Do they even have a Whataburger here?

The worst place to live in Texas is Southeast Houston after dark.

This channel talks about America, different states, education, travel, geography and what it’s like to live in different places in America. Kids friendly!

Mappy: Mappy@HomeSnacks.net. He’ll do his best to answer your questions and fan mail.

My little children, let us not love in word, neither in tongue; but in deed and in truth.
1 John 3:18
DailyVerses.net