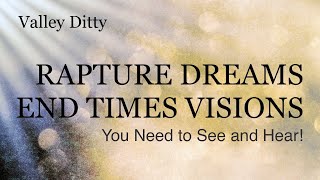 This YouTube video covers most of the Rapture Dreams and Visions you need to see and hear. Every rapture dream and end times vision comes from notes diligently taken from 2021 to 2022. We are at the End of the Church Age, when the Signs of the Last Days are so clear and urgent!

A new post from Valley Ditty, it begins and ends with a prayer. That YOU who found this will seek the LORD all your heart.

“You will seek Me and find Me when you search for Me with all your heart.” (Jeremiah 29:13)

Sinners all, we are called to repent and receive Jesus Christ as our Lord and Savior — before it’s too late. Heed the warning: The good news that, in the fullness of time, any day now, He appears and returns for His church.

As a follower of Christ, I am one of the watchmen on the wall and have been, for some time now… I hesitated at first but would be accountable to Almighty God if I did not share this warning with you. So, with faith over fear, I’m going ahead and making these dreams and visions known to all who are willing to listen.

Now if you or someone you love has had prophetic dreams or visions before, then you’d understand what it‘s like and what I’ve gone through just to get to this point.

A brief testimony: I received Jesus Christ as my Lord and Savior in 1988. The evangelical times then – this was back in the 80’s — set a good foundation for preparing you to know God’s Word and being aware that sound doctrine, biblical prophecy, and spiritual warfare did exist.

But from being a student then to my life now, I can’t say that I was going to church, having fellowship, or reading the Bible as much as I ought to for the next 20 years; that is, until the year 2021 which was a major turning point for me. Again, I was called back to the ministry.

There’s so much more to this story and the journey to get here, starting with the most vivid dream I had as a child at age 11 that changed my life and brought me close to Jesus in such a personal way.

Other than prophetic dreams in the past about myself and people dear to me, once I also woke up to the sound of what must be Heaven. This was way back in year 2000-2001.

The beauty of the voices, light like tinkling bells, and the splendor of the music are impossible to describe so I won’t even try to; because you’re there one moment, and then in an instant you’re awake wanting to retrieve it all, but then it’s just a dream and a memory.

But it happened once. Anyway, this is where I’m coming from. And that’s why I write songs and articles about the character of God: who He is and what He Has done.

Thank you for listening and may we all be blessed! The time is nigh. Look up!

For God sent not his Son into the world to condemn the world; but that the world through him might be saved.
John 3:17
DailyVerses.net