Miracles (Can a Miracle happen?) 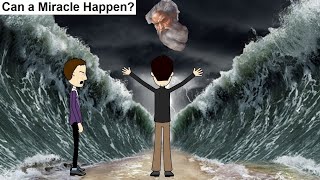 Join George and John as they discuss and debate different Philosophical ideas. Today they will be looking at Miracles. We understand Miracles to be a violation of a law of nature, but the question is, can a miracle happen? Most religions claim Miracles happen, so do we have a basis to believe in Miracles.

The two will be discussing this idea as well as looking at David Hume’s criticisms of the idea of Miracles. This debate will take a for and against look at the ideas of Miracles and if it is right to believe in them.

What shall we say then? Is the law sin? God forbid. Nay, I had not known sin, but by the law: for I had not known lust, except the law had said, Thou shalt not covet.
Romans 7:7
DailyVerses.net