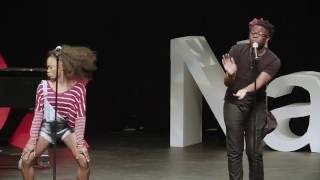 Poets Debria Tyler and Luso Chithambo take on and twist the stereotypes associated with Blackness. Debria Tyler is a graduate of Oakland High School who will be attending MTSU in the fall. Luso is a graduate of Nashville School of the Arts and a sophomore at Trevecca University. Both were part of the Southern Word slam team in Atlanta in 2015 and are headed to Washington DC this summer (2016).

Through the literary and performing arts, Southern Word offers creative solutions for youth to build literacy and presentation skills, reconnect to their education and to their lives, and act as leaders in the improvement of their communities. We are absolutely committed to providing youth, especially in underserved communities, with as many opportunities as possible to develop and publicly present their voices both live and in print, video, audio, and digital media. This year, Southern Word will serve over 5,000 youth through programs in 8 Tennessee counties, in almost every public Nashville high school, on four Middle Tennessee public college campuses, and in a large number of Nashville Public Library branches.

This talk was given at a TEDx event using the TED conference format but independently organized by a local community. Learn more at http://ted.com/tedx

Are not two sparrows sold for a farthing? and one of them shall not fall on the ground without your Father. But the very hairs of your head are all numbered. Fear ye not therefore, ye are of more value than many sparrows.
Matthew 10:29-31
DailyVerses.net