A Sacred House of the Lord | Washington D.C. Temple 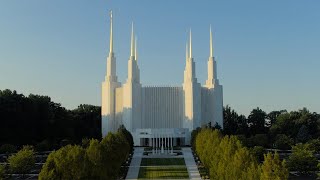 Take a look inside the Washington D.C. Temple of The Church of Jesus Christ of Latter-day Saints. Learn more about how each person is truly a son or daughter of God, how families can live together forever, and how we all can be united with Jesus Christ. The tour is hosted by Elder and Sister Stevenson and Elder and Sister Renlund.

For members of The Church of Jesus Christ of Latter-day Saints (sometimes referred to as Latter-day Saints), the temple is the most sacred place of worship on earth—it is the house of the Lord. It is a place set apart from the rest of the world where members seek to draw closer to God.

Temples are different than the thousands of Church meetinghouses located around the world. Meetinghouses are where Sunday worship services, youth gatherings, service projects, and other community events take place. All are welcome to join in these activities. Temples have a more specific purpose. They are places specially set apart for sacred service and ceremonies. They are designated by the Lord and dedicated to His purposes. Temples are the only places where some religious ceremonies, called ordinances, are authorized to be performed. These ordinances lift and inspire participants as they promise to follow the teachings and example of Jesus Christ.

A free public open house is held after each temple is built or renovated. During that time, people of all ages and faiths are welcome to enter and tour the temple. Once dedicated, entrance into the temple is reserved for members of the Church who have committed to live the gospel of Jesus Christ and are ready to participate in sacred ordinances.

What Are Baptisms for the Dead? https://www.youtube.com/watch?v=RzCSrMJhWeQ

What is a Temple Endowment? https://www.youtube.com/watch?v=Fd8tVXN9y6Q

SUBSCRIBE to The Church of Jesus Christ of Latter-day Saints for the latest videos: http://bit.ly/1M0iPwY

For he hath made him to be sin for us, who knew no sin; that we might be made the righteousness of God in him.
2 Corinthians 5:21
DailyVerses.net