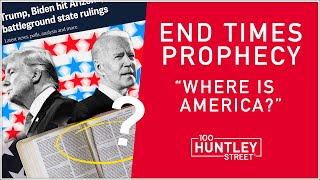 Prophecy expert Mark Hitchcock deals with often-raised questions about America’s future examining prophetic passages that are commonly thought to describe America. Hitchcock concludes that the Bible is actually silent about the role of the United States in the End Times. He then discusses the implications of America’s absence in prophetic writings along with a compelling forecast for the future.

Need prayer? Our Prayer Line services 1-866-273-4444 are available toll-free 24/7.
Or you can submit your prayer requests online http://100hs.ca/prayer
We also offer extended assistance to those in need.

Looking for a daily show that will encourage and inspire your Christian faith?
Every day at 12 noon EST 100 Huntley Street brings you the amazing stories of people – whether they be world leaders, celebrities, sports figures, or everyday people – who have had life-changing encounters with God.

100 Huntley Street is a production of Crossroads Christian Communications Inc.
This program is funded by the generous support of viewers. To donate or to become a monthly partner visit https://donate.crossroads.ca/

Castle is home to hundreds of television shows, documentaries, movies, including all Crossroads productions like See Hear Love, Context Beyond the Headlines, and 100 Huntley Street. One of the unique features of Castle is the ability to chat in real-time with a digital pastor. Castle is 100% FREE for all.

Wherefore thou art great, O Lord God: for there is none like thee, neither is there any God beside thee, according to all that we have heard with our ears.
2 Samuel 7:22
DailyVerses.net