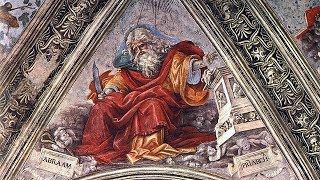 In this lecture, I tell the story of Abraham, who heeds the call of God to leave what was familiar behind and to journey into unknown lands. The man portrayed in the Bible as the father of nations moves forward into the world. He encounters the worst of nature (famine), society (the tyranny of Egypt) and the envy of the powerful, who desire his wife. There is nothing easy about Abraham’s life. Instead, he is portrayed both as a real man, with serious problems, and a hero, who overcomes tremendous obstacles to establish himself in the world.

His covenant with God is an Ark. His decision to aim at the highest good he can conceptualize places an aura of magic around the events of his life, despite their harshness. He’s a model for life in the world as it is, not as we wish it would be.

The liberal soul shall be made fat: and he that watereth shall be watered also himself.
Proverbs 11:25
DailyVerses.net