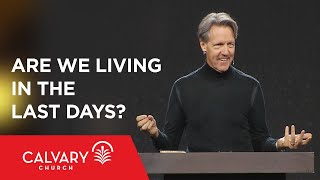 When it comes to the last days or the end times or, for that matter, any Bible prophecy, there is no shortage of speculation and sensationalism. Every generation has its doomsday preachers predicting the end of everything, trying to fit current events into the predictive prophecy so prevalent in Scripture. Yet one day the world will end. So what are the last days and what are the characteristics of that time period? Let’s consider five features.

This teaching is from the series 20/20: Seeing Truth Clearly with Skip Heitzig from Calvary Church.

Blessed are the peacemakers: for they shall be called the children of God.
Matthew 5:9
DailyVerses.net