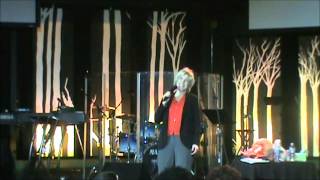 Stand Up Comedian and Speaker for Women. The very funny keynote speaker, Sally Edwards, delivers Mother Goose nursery rhymes and you’ll never be able to read them with a straight face again!

Who being the brightness of his glory, and the express image of his person, and upholding all things by the word of his power, when he had by himself purged our sins, sat down on the right hand of the Majesty on high.
Hebrews 1:3
DailyVerses.net