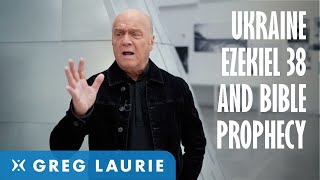 We’re all aware of what’s happening over in the Ukraine right now. They’re under attack from Russia, and people have asked the question, “Is there any significance to all of this prophetically?” Let me pull the camera back and say this: I believe we’re living in the last days. I believe Christ could come back at any moment.

There are signs of the times the Bible tells us to be looking for. And in fact, Jesus likened it to labor pains in a woman who’s ready to give birth, the idea being the closer they get together, the closer you are to the birth. And as we see more signs—more things happening—they’re reminding us Christ is coming back again. Let’s go to Matthew 24.

What did Jesus say? “And you will hear of wars and rumors of wars” (Matthew 24:6 NKJV). So this is war at a scale we have not seen in a long time. But let me look at another thing in Matthew 24. It talks about plagues being around us in the last days (Matthew 24:7). If the coronavirus is not a plague, I don’t know what it is. It’s a global plague.

Also, I would add that the Bible warns of a world leader that will come and dominate and deceive people but ultimately reveal his true colors. And he’s called the Antichrist. I believe a lot of this government overreach, imposing themselves on their people, is a sign of what is going to come later when Antichrist emerges on the scene.

But let’s come to the situation in the Ukraine. Many Bible scholars believe in the Ezekiel 38, as it speaks of Magog attacking Israel, that that is modern day Russia. I could go and talk about that for, you know, 30 minutes, why they believe that’s true. I happen to agree with them, but it says in Ezekiel that the Jewish people will be scattered and regathered in their land again.

We know, during World War II and after the Holocaust, Jewish people from around the planet began to return to their land. And Israel officially became a nation on May 14, 1948. So that part of their prophecy has been fulfilled. But then scripture says a nation from the extreme north of Israel will march on her called Gog and Magog.

If you look on any map, you’ll see that is the geographical area of Russia. Ukraine used to be a part of the Russian Empire. They broke off in 1991. Are they going to be part of Russia again? Could be. But the one thing that I think of is that when I see the aggression of Russia or Magog, if you will, it’s a reminder that that’s what we’re going to see when Magog attacks Israel.

What Should We Do?

So Jesus said, “When you see these things begin to happen, freak out!”

No, he didn’t say that. He said, “Now when these things begin to happen, look up and lift up your heads, because your redemption draws near” (Luke 21:28 NKJV). Here’s the bottom line and takeaway truth: Bible prophecies are being fulfilled in our lifetime. It seems like we’re seeing more things happen in real time, closer together, as the Scripture said they would be.

Thank you for watching, tune in live here on YouTube every Sunday and Thursday for more messages of hope and encouragement from Pastor Greg Laurie!

To support the ministry of Pastor Greg Laurie and help us continue to reach people with the life-changing message of Jesus Christ, visit here https://harvest.org/donate/