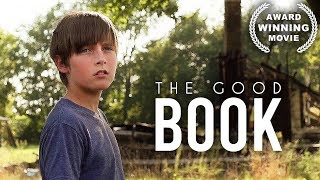 The Good Book – A small New Testament passes through the hands of fourteen strangers. For seven of the individuals, their lives will never be the same.

Storyline:
A small New Testament passes through the hands of fourteen strangers. For seven of the individuals, their lives will never be the same.

Reviews:
“When one thinks of silent films, they normally think back to the early 1900s, when movies were in black and white, had very grainy images, and the only concept of dialogue was slides with text interspersed throughout the film. However, in the late 20’s and into the 30’s as “talkies” or talking pictures became the newest and greatest form of visual entertainment, silent movies slowly faded away. With various exceptions like The Artist (2011), silent films are nearly non-existent in an age where big explosions, high-res graphics, and controversial language are the keys to selling tickets. What’s even more rare than a silent film is silent Christian film. While the past few years have brought us a slew of new Christian media, few have dared tread into this difficult and seemingly obsolete area of filmmaking.

The Good Book, released on February 2nd, goes off in a completely different direction than your average Christian film, attempting to tell a feature-length story completely without words. The whole film is accompanied solely by a musical score, not uttering a single word until a few testimonials during the credits.

First off, look at the pros of creating a silent film. Without having any dialogue, it negates the need for a lot of audio equipment. You don’t need many of the traditional equipment pieces, such as a microphone, wind muff, boom pole, recorder, several cords, and so on. It takes a lot of different pieces to add sound to a film, both in production and post-production. Removing sound from your film makes it much more affordable and allows you to spend your budget on other places. Besides being cost-effective, it also transcends language barriers. While the majority of films need to be dubbed in other languages in order to reach an international audience, a silent film is understandable in any language. This way of breaking down a language barrier is also a wonderful ministry tool, as it really does work in almost any community, regardless of what language is spoken therein.

This film does an amazing job of utilizing these benefits, but unfortunately, it does also have a few problems. While a silent film may have worked for this particular story, acting in a silent film is exceedingly difficult. Actions in this movie had to be done very obviously in order to communicate what was transpiring in the film to the audience. Something as simple as a child sneaking out his bedroom, having his flashlight fail, and him resorting to a match and candle instead are all acted out very awkwardly and unrealistically. If it were acted out more realistically, however, the audience might have missed out on what was happening in front of them. […]

[…] If you are tired of the “Christian film formula” and want to check out something a little bit different, I would wholeheartedly recommend The Good Book.” Written by christianfilmcentral.com

COPYRIGHT: All of the films published by us are legally licensed. We have acquired the rights (at least for specific territories) from the rightholders by contract. If you have questions please send an email to: info@amogo.de, Amogo Networx – The AVOD Channel Network, www.amogo-networx.com.

Let nothing be done through strife or vainglory; but in lowliness of mind let each esteem other better than themselves.
Philippians 2:3
DailyVerses.net